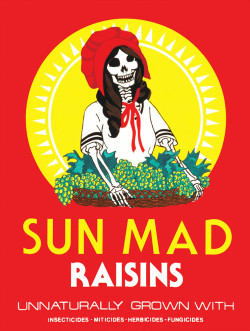 A first-generation Chicana, Ester Hernandez is a key figure in the Chicano civil rights art movement that emerged in America in the late 1960s. Her most famous image, the screenprinted poster Sun Mad, was first created in 1981 and expresses her anger at the human and environmental cost of pesticide use in commercial grape growing in California. A second edition of the screenprint, printed in 1982, has recently been acquired by the Victoria and Albert Museum and will feature in the forthcoming exhibition “A World to Win: Posters of Revolution and Protest.”1

Making or displaying a poster is often a political, sometimes even a dangerous act, and for many social and political movements poster production has been an important form of cultural output. As the repository of the UK’s national poster collection, the V&A holds an impressive range of political posters, about 70 of which will be represented in the exhibition. Produced over the course of a century, from the Votes for Women campaign to the recent Occupy movements, these images were created to mobilize, educate and organize people to produce change. Hernandez’s print is important as a vibrant example of Chicano political art (not broadly represented in the UK), an early dramatization of environmental awareness and a potent subversion of corporate branding.

Born in 1944, Hernandez grew up in Dinuba, a rural town in California’s San Joaquin Valley, sometimes described as “the salad bowl of America.”2 While much of the country’s produce is grown in this area, the metaphor has another connotation, pertinent to understanding how Hernandez and many other Chicano artists identify themselves. Unlike its semantic forebearer, the “melting pot,” which was coined in the late 19th century to describe the fusion of European immigrants into a common American culture, “salad bowl” describes a mélange of ethnic groups tossed together while retaining their separate identities. In the 1960s, the term “Chicano” was adopted by people of Mexican descent living in the United States who had become politicized by their experience. Chicano art was, from its very beginning, an art of protest, connected to social politics and the labor movement and concerned with creating distinctive work that reflected the Mexican experience in the United States.

During the Great Depression, Hernandez’s grandparents immigrated to California from Mexico to work on commercial grape farms. Having been forced to cut short their own educations, her parents were determined that their daughter finish high school. After graduating, she moved to the San Francisco Bay Area, got married and had a son. In her late twenties she went back to school, eventually enrolling at the University of California, Berkeley, to study anthropology. During her studies she shifted her focus to the visual arts, working with emergent Chicano artists, and later joined the Mujeras Muralistas, a group of female artists creating large-scale murals depicting the social concerns and everyday life of the Mexican community in San Francisco’s Mission District. In the post-1968 era of grassroots activism, posters became tools of empowerment. They were used, for example, to publish images of black power and beauty, or of women daring to revolt. Like many Chicano artists, Hernandez was drawn to screenprints, which are inexpensive, can be reproduced and circulated easily, and suit her bold use of graphics and color.

In response to the African-American Civil Rights Movement of the late 1950s and early ’60s, Mexican-American groups also organized to fight for social and political change. Unfair labor practices, voting restrictions and housing discrimination were common experiences for Chicanos and Mexican immigrants in America. For the many Mexican-American migrant workers, the formation of the United Farmworkers of America (UFWA) was a critical development. From 1965 the UFWA, led by César Chávez and Dolores Huerta, organised a series of successful strikes and boycotts against major American grape growers, demanding better wages and employment rights. The boycotts thrust the issue of conditions for farmworkers onto the dinner tables of America. Hernandez became involved with the UFWA, which, along with with her engagement in the politically charged Berkeley community in the 1970s, confirmed her sociopolitical artistic identity and commitment to activism.

Against this backdrop Hernandez learned that pesticides used on the grape farms surrounding Dinuba had leached into the ground and contaminated the town’s water sources. Concerned for her family and friends and feeling a responsibility to speak up for those who could not speak up for themselves, Hernandez created Sun Mad in 1981. She chose SunMaid Growers of California, a privately held cooperative, as her target because the raisin grapes harvested in her hometown went to the cooperative for processing.

One of the most memorable company emblems ever created, the Sun Maid embodies a vision of California sunshine and prosperity. As the official company history tells us, the original Sun Maid was Lorraine Collett, a California fruit packer who was discovered by company representatives in 1915. Her image is so established in American popular culture, in 1988 Collett’s original red bonnet was acquired by the Smithsonian Institution in Washington and now forms part of its permanent collection, alongside Dorothy’s red shoes from The Wizard of Oz and the tattered flag that prompted Francis Scott Key to pen “The Star-Spangled Banner.”

Packaged in small, child-sized boxes, Sun-Maid Raisins have been a staple in school lunch boxes for generations; as a result, many people associate them with the innocent pleasure of childhood. Hernandez reproduced the familiar raisin box composition, with its tomato-red background, yellow disk of sun and bonneted figure bearing grapes. But in place of a friendly young face looking out from beneath the oversized red bonnet we find the leering face of death. The poster’s small print explains the Sun Maid has been poisoned by “insecticides, miticides, herbicides, fungicides.”

Hernandez’s skeleton dramatizes the lethal consequences of pesticides and at the same time firmly locates the print in the tradition of Mexican printmaking dating back to José Posada, whose calavaras (skull) illustrations satirized Mexican society at the end of the 19th century. Posada’s work has influenced many Mexican artists and has come to define the visual imagery associated with Day of the Dead festivities, which are celebrated around the world.

Although Hernandez and other Chicano artists identify as part of an artistic movement rooted in cultural difference, many have extended their concerns and political outrage by creating protest posters for a wide range of causes including the Vietnam War, apartheid and Palestinian rights. Sun Mad points to the plight of farmworkers but also calls attention to the risks to consumers. Hernandez has been credited with creating one of the first images to link the plight of farmworkers to effects on consumers and the environment.3

In 1982, when Hernandez first printed Sun Mad, no one took much notice of it.4 Due to her growing reputation as an artist, however, and following its inclusion in a number of seminal exhibitions and publications on Chicano art, Sun Mad has gained her more attention.5 With the growth of the environmental movement, its cautionary message about over-reliance on pesticides continues to resonate as consumers have increasingly demanded to know what goes into their food. Sun-Maid has never publicly commented on the work.

In recent decades, as artists have responded to the traumas of economic globalization, the poster has become a way to undermine corporate media dominance: artists hijack big brands, alter logos and manipulate company slogans or straplines. Sun Mad is an early example of such “subvertised” posters, and a particularly powerful one.

This article is part of the series, “Treasures from the Vault,” which was made possible with the generous support of the IFPDA Foundation.